Class of 1970, Memphis Central High School, Memphis, Tennessee
"Master of all knowledge, slave to none"

The Mackerel Brigade (or The Royal Sons of Crime)

By
Robert I. Livingston, Jr.

​2021
MEMPHIS HISTORY BOOKS
In a time right after the Civil War, the Mississippi River wasn't all Tom Sawyer and Huckleberry Finn - This is the novel that Mark Twain COULDN'T write and probably WOULDN'T write at the time. The Mackerel Brigade is the real "life on the Mississippi," and this novel lays it out flat what the world of riverboatmen and gamblers and all of their world was really all about in the late 19th Century. It was a world of danger and violence where the strong survived and the weak were never heard from again.
​The novel is about "Jew Jake" Ackerman's murder in Memphis in 1890. He was the most notorious outlaw to ever come out of Memphis during the Civil War and the period afterwards when Memphis was a lawless frontier town that harbored every variety of criminal that came off of the Mississippi River. Ackerman was originally the leader of a gang of street boys when he was younger and the hero of the juvenile thieves who prowled the streets of Memphis with impunity in the 1860s with Ackerman as their leader. This gang became known as The Mackerel Brigade which gang was the most notorious of all the gangs of the river cities on the Mississippi, surmounting even the gangs in New Orleans and St. Louis. Ackerman eventually moved on and extended his criminal operations into New Orleans, Vicksburg, Little Rock, St. Louis, Omaha, and Texas around Rockdale and Jefferson among many other smaller places in other states and cities. He served time in numerous penitentiaries in Mississippi, Louisiana, Indiana, Missouri, Iowa, and Nebraska. Eventually he turned to train robbery in the 1880s and along with his wife, Lizzie, they conducted raids up and down the railroads from Iowa to Florida. The book focuses on his murder in Memphis in 1890 and who was behind it. Jake was thirty-eight when he died and was undisputedly one of the biggest crooks, con-men, pickpockets, gamblers, and pimps in America. He's buried in the Jewish Cemetery on Hernando Road in the "evildoers" section there in Memphis, Tennessee. This is the first novel ever written about him. 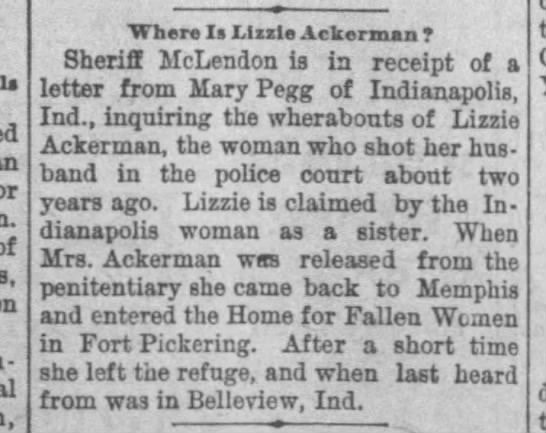 ​ EVENT IS CANCELED DUE TO GOVT RESTRICTIONS FOR COVID-19 -- FURTHER INFORMATION WILL FOLLOW!

Facebook Site for CHS 1970
We are attempting to make a 50th anniversary yearbook (of sorts). This will be made available on the private Facebook site for the reunion members (link above). Also, if you are interested in submitting your information for inclusion in this yearbook, please fill out the form below.
The form is confidential to this website. It is not accessible or viewable by the public

Put the following information shown here only (use the form below)

1 recent pic *send to rlivingstonjr@hotmail.com or patsyconnell27@yahoo.com
2 where you live what city but not the address
3 brief career info
4 wife/husband
5 comments
6 why CHS did something special for you

THIS EVENT IS CANCELED DUE TO GOVT RESTRICTIONS FOR COVID-19 -- FURTHER INFORMATION WILL FOLLOW!
Report is now as of 27 Sept 20 that this event will be held some time in 2021 - no further details at this time

June 5th and June 6th, 2020   Are you ready for some great partying??  A party with the most wonderful classmates and friendships?  A party to reunite you and your old friends from Central, friends you have not seen in who knows how long?  Parties that will bring back some your fondest memories from the day, parties that will bring us all together again?  Well, I am!!!! Here’s the info!!!!  The cost will be $70.00 per person if you pay by March 1, 2020 (postmarked by this date!).  After that, it will increase to $80.00 per person.  We have expenses to pay in advance, and it’s not fair to the committee to foot the bill.

There will be no payments at the door, with some exceptions.  We have to pay for venues, expenses, food and drink costs.

Cocktail Hour will begin at 6:00 p.m. with hors d’oeuvres being served.  The buffet and sit-down dinner will begin at 7:00.  A few announcements will be made at 8:00 and then a DJ takes over, playing our music.  This is an open bar event and it can be a little dressy.  Their food is awesome.  Remember, this is a full sit-down dinner.  You have already paid for it and for all of your drinks.  It’s an open bar.

If anyone wants to donate door prizes, please feel free to do so.

OUR 50TH IS A PRETTY IMPORTANT EVENT IN OUR LIVES.  THIS WILL BE THE LAST BIG REUNION EXCEPT FOR GET TOGETHERS EVERY NOW AND THEN.  LET’S MAKE THIS A REUNION TO REMEMBER AND HAVE A BIG WARRIOR TURNOUT!!!!! 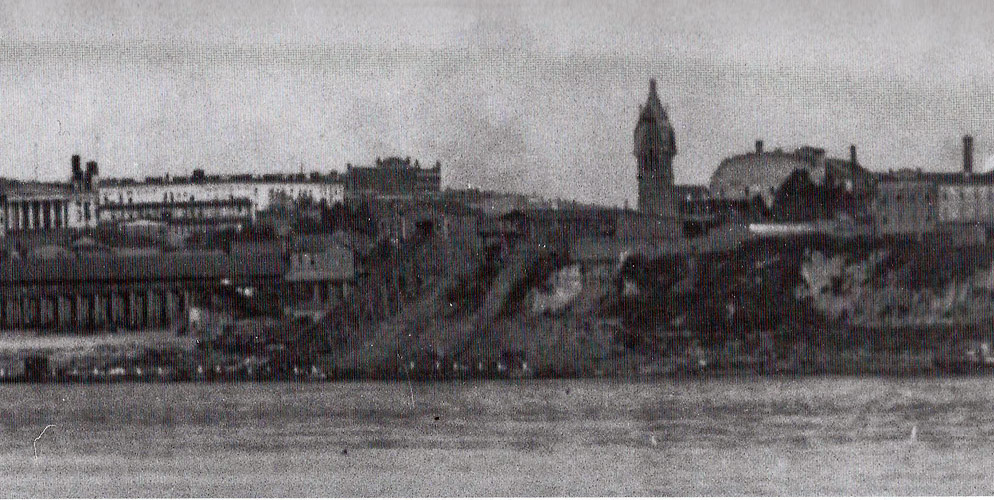 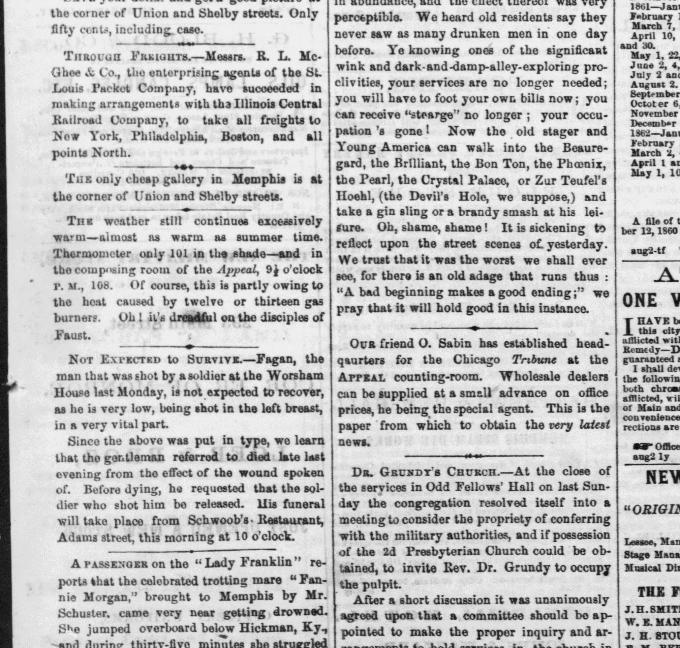 "Not Expected to Survive" - the end of "Bully" Fagan on Aug 6, 1862 as published in The Memphis Union Appeal newspaper - Fagan was the first big gangster in Memphis - shot and killed by a Union soldier named Pvt John B. Ridgley (Indiana 47th Infantry) at the Worsham House Hotel at Adams and Main - fight over some "railroad money" - Fagan was a well known character in Memphis - robbed a store in Chicago, IL in Jan, 1860 - showed up in Memphis later and took over the Irish gangs that later became The Mackerel Brigade (mackerel means "Royal Son" and is from the Gaelic language, but the spelling was corrupted in English to "mackerel") 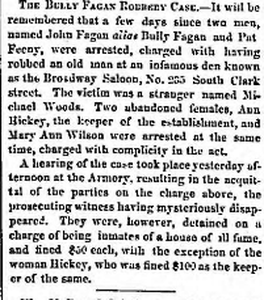 From The Jackson Sun on Feb 9 1877 - by the fact the name is false, he's
running in Indiana (and KY and IL) then plus the use of a pistol, plus how
he fled to the RR yard, this is very likely Jake Ackerman. He was working up
and down the IC RR then out of Cairo, IL. Also he was around Evansville, IN
in 1877. He went to the Indiana St Pen later in 1877 in late Dec of that
year. Can't confirm 100% this is Jake, but the cops in Jackson, TN call him
a "desperado," which means more than just a local crook. They probably
didn't know his real name in Jackson, TN. Jake went by many aliases, but
this James Connor one is a new alias for him I've found if this is actually
Jew Jake. He never gave the police his real name if he could help it. If they knew who he was
(Jew Jake Ackerman) then so it was, but he was a shifty, clever character.
Too bad the newspaper account copied here does not give a better description
of him by height, face, etc. He wound up on the Jackson, TN chain gang for
what he did in this particular episode. He assaulted a watchman with a
weapon (pistol) and fired his pistol in the street outside of Cab Smith's
saloon (at Lafayette and Market Sts--Market is now Highland).

The second image below concerns his release from jail where he faked sickness to get out - from the City Minutes of Jackson, TN, Mar 7, 1877 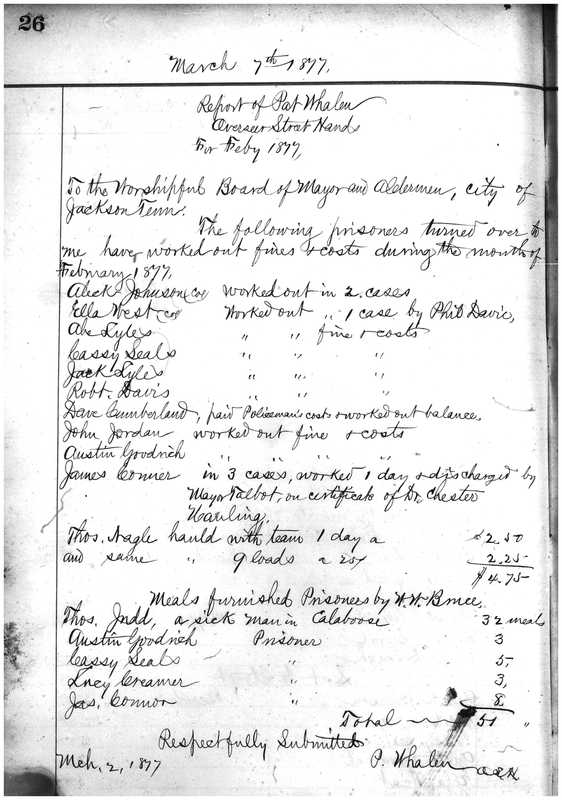 Jackson, TN - City Minutes, March, 1877 - Concerning the release of James Connor who is really Jake Ackerman by a false name
The Clarion-Ledger, Jackson, Mississippi, Thursday, May 08, 1890 - Page 2
Mrs. Ackerman Pardoned. Nashville, Jan. 16. (Special to the C-J). Gov. Taylor today pardoned Mrs. Lizzie Ackerman. of Memphis, and she was taken home tonight, where the will be taken care of at the Woman's Refuge. Lizzie Ackerman, who has been in the penitentiary only a few months, committed one of the most sensational murders that ever occurred in Memphis. Her husband had been arrested on a charge of mistreating her and was being tried in a magistrate's court, when Mrs. Ackerman drew a revolver and shot him dead. She was convicted and given a short sentence. Attempts have been made to procure a pardon ever since her conviction. 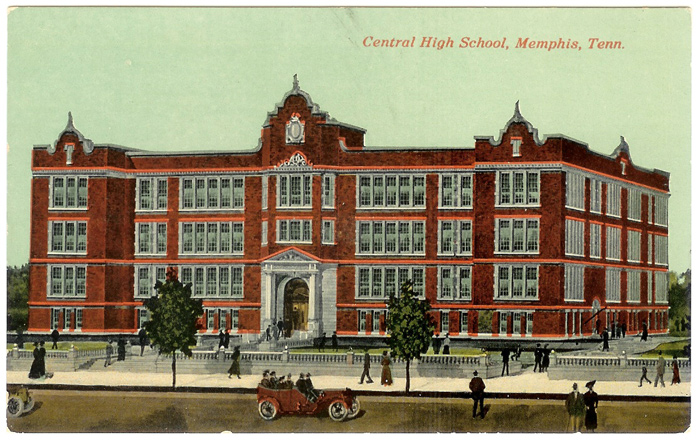 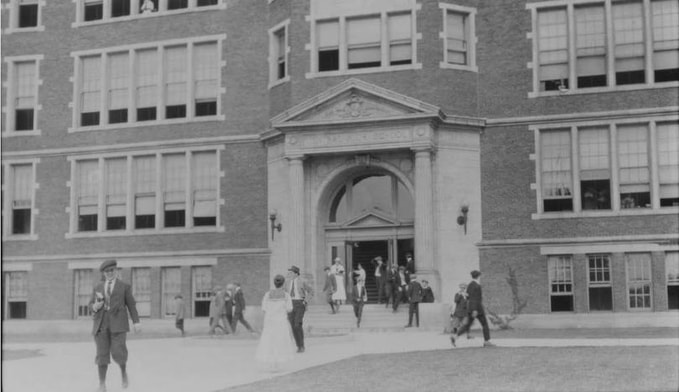 Very early photo of Central High School about 1911 or 1912 (Pink Palace Collection - Memphis Public Library)
A WELL KNOWN TOUGH. JAKE ACKERMAN KILLED BY HIS WIFE AT MEMPHIS.
[the actual copy of the article above]
A Sketch of One of the Most Noted Criminals Ever Confined In the Mississippi Penitentiary

A Convict in Four States. 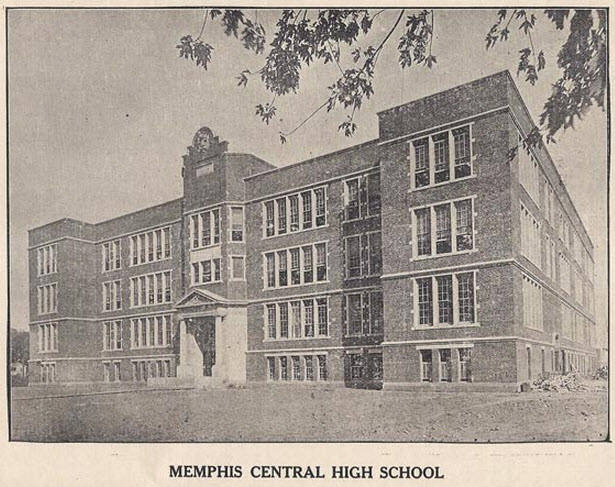 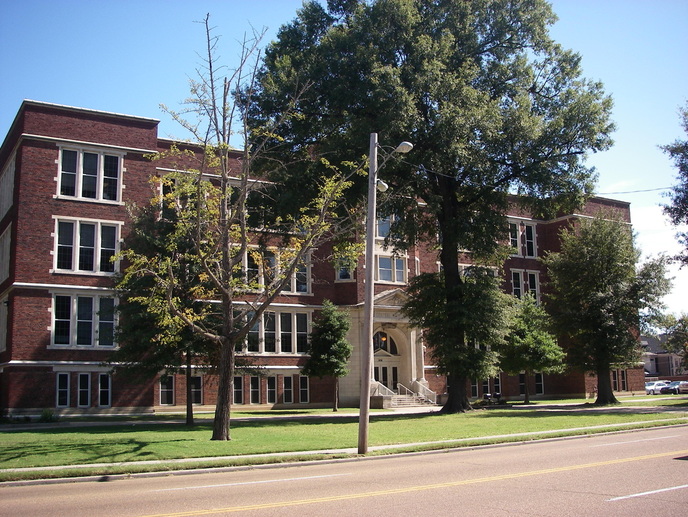 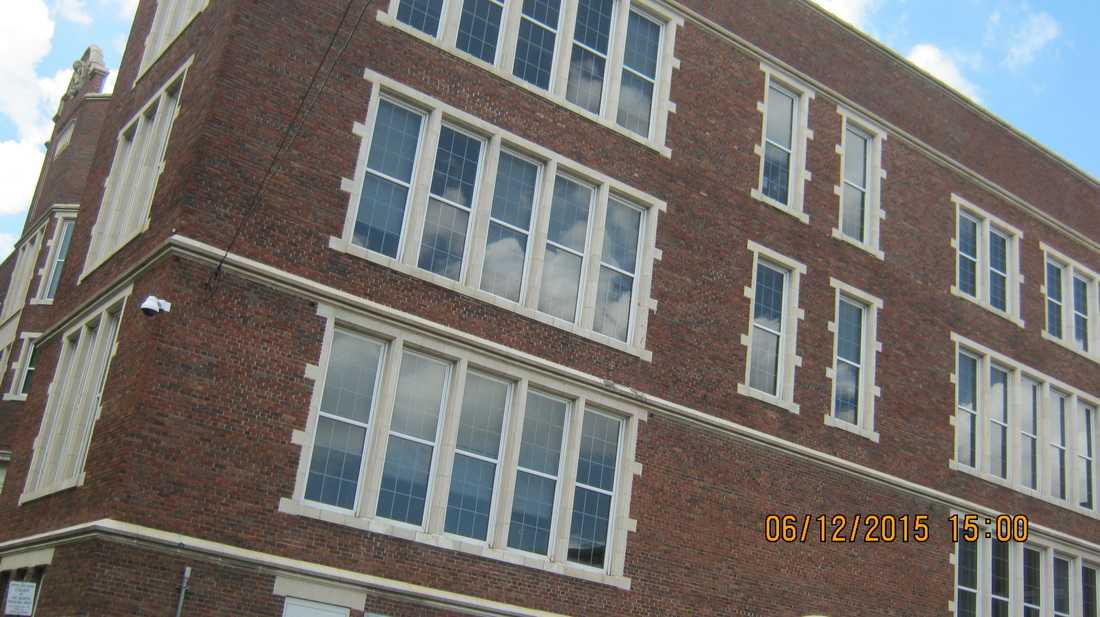 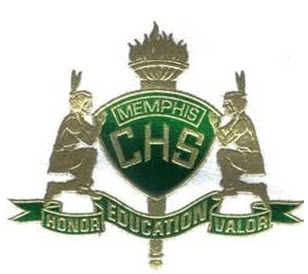 Memphis, Tennessee from the Air in 2009

Memphis about 1865 - View looking north from the Ft Pickering area

Old Memphis High School - opened in 1898 (closed in 1911 when CHS opened) - picture at Washington Ave. and N. Lauderdale/Yates Sts. - 1960 photo (Pink Palace Collection - Memphis Public Library) - this building was demolished in Nov, 1965. - official address was 317 Poplar Ave. (this is the back of the school building) 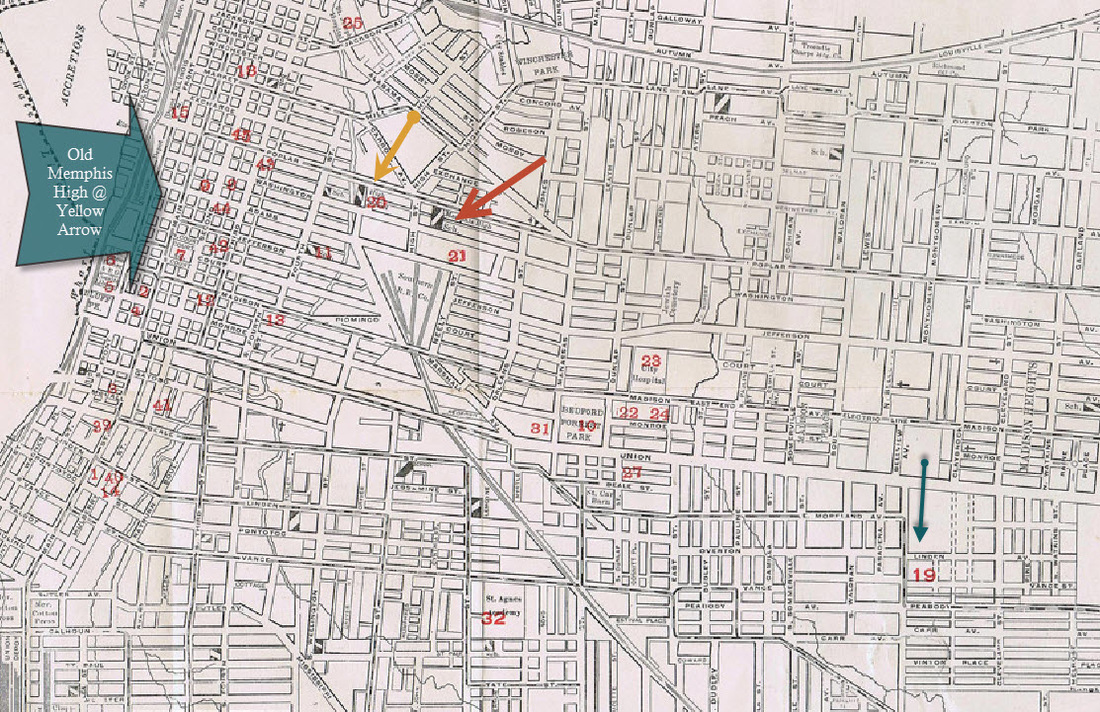 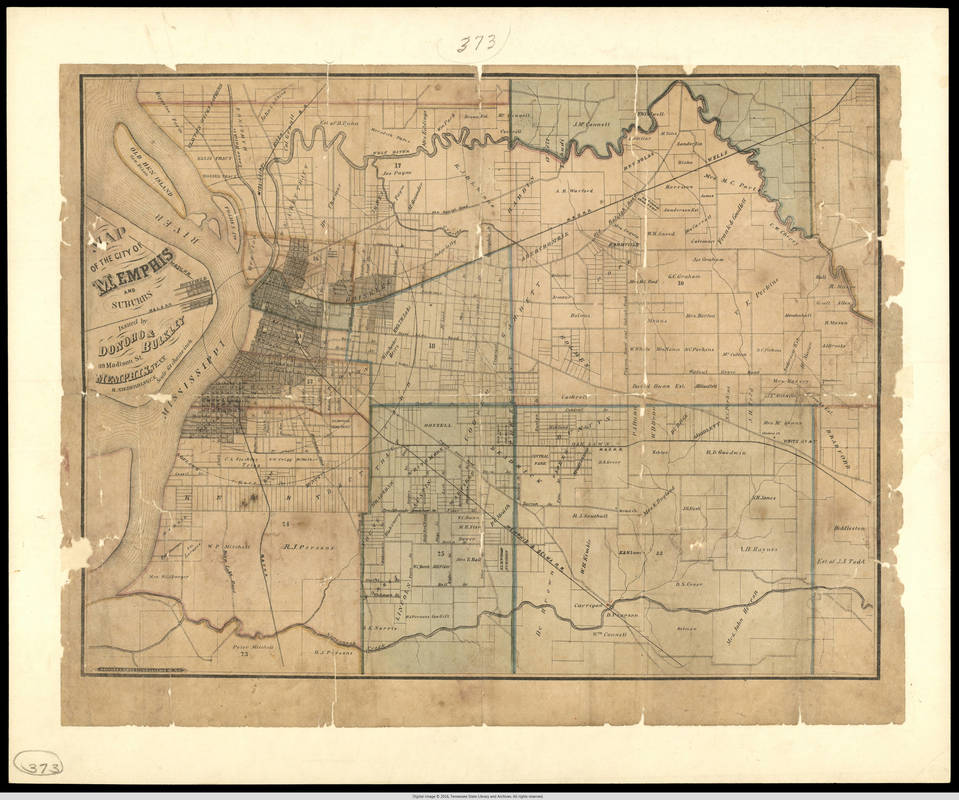 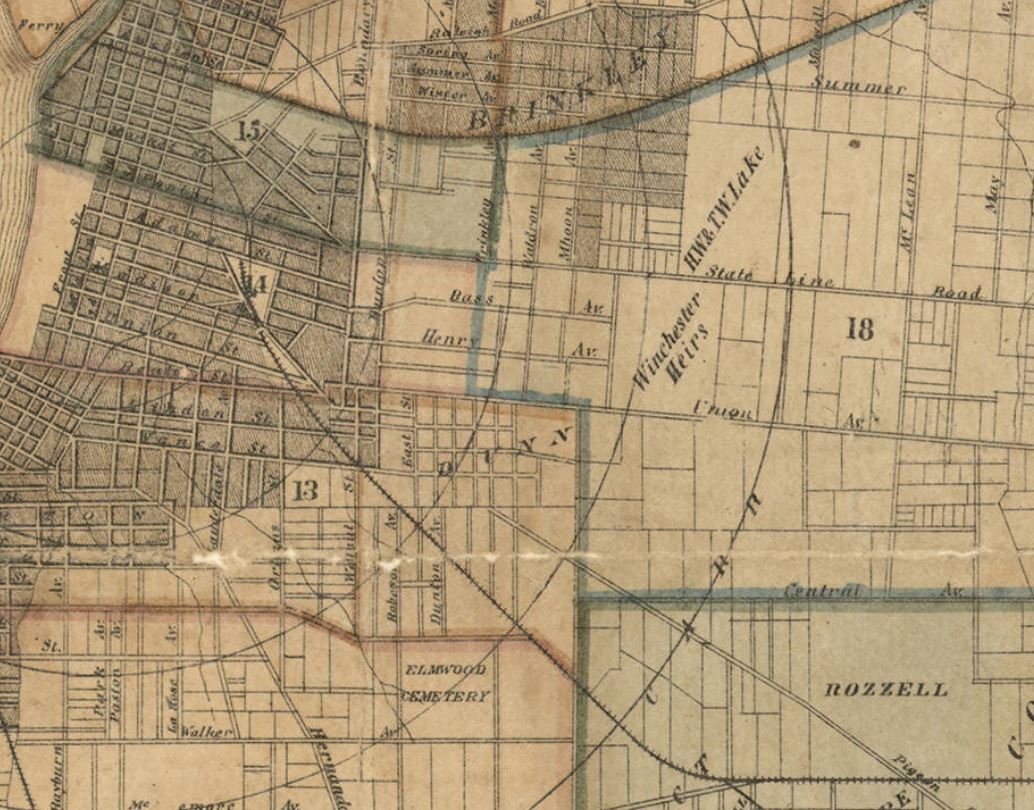 Map of Memphis in 1871 (for comparison) - this is the oldest known map of the entire greater Memphis area at that time in any detail although a military map drawn in 1863 by the US Army exists but does not have the level of detail of this 1871 map - note too where the area of Central High is on this map - very little developed around that part of Memphis then other than Union Ave was there (you may download this map at: http://teva.contentdm.oclc.org/cdm/singleitem/collection/p15138coll23/id/9216/rec/12)

Create your own unique website with customizable templates.
Copyright 2015 - 2021 - All Rights Reserved