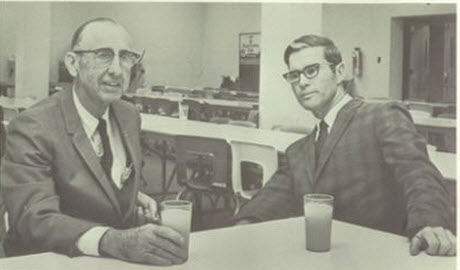 
Dean Carlton DuBois, Jr. Bethesda, MD - November 29, 1952 - August 13, 2019 Native Memphian Dean Carlton DuBois, Jr. died on August 13 at the age of 66 after a brief illness. A resident of Bethesda, Maryland, Dean began his studies as a premed major at Vanderbilt University, where he was a member of Kappa Sigma fraternity. He later transferred to the University of Arkansas where he earned a Bachelor of Architecture degree, studying under the famed architect (and Frank Lloyd Wright protégé) E. Fay Jones. After graduation, Dean worked with O'Brian Associates, J. Wise Smith Associates, and Holiday Inns, Inc. in Memphis —and later worked with Doubletree, Marriott, and Ramada Inns in Phoenix, Palm Springs and Washington D.C. Dean helped develop and manage a range of large-scale projects with an emphasis on hotels and resorts. Some of these included the Estancia Hotel & Beach Club in Jose Ignacio, Uruguay; the Ritz-Carlton Hotel in St. Thomas, U.S. Virgin Islands; the Ritz-Carlton in Rancho Mirage, CA; and the St. Regis Hotel in Washington D.C. His non-hotel/resort projects included condominiums and apartments, mixed-use facilities, and office buildings all over the country. Two of his favorite projects were the Human Rights Campaign Headquarters in Washington, D.C. and the Tampa Bay Buccaneers Training Facility & corporate offices in Tampa, FL. Most recently he was the senior project manager at RLJ Lodging Trust in Bethesda. Dean was universally known for his ever-present sense of humor, his integrity, and his limitless kindness and thoughtfulness of others. Dean had a genuinely and contagiously happy nature. He sang around the house and often broke into his "happy dance." He was quick with a smile and a hug, always eager to help friends and neighbors. Dean's creativity was boundless and innovative. For an office masquerade party, Dean designed and constructed his own "facade mask," an exact replica of a hotel he had worked on in Miami South Beach complete with working lights. His humorous poems were legendary as well, most recently on display when he "emceed" the rehearsal dinner of his nephew's wedding in New Jersey—a mere three weeks before his death. Always gracious and smiling, very few people knew that he was seriously ill at the time. Dean DuBois was preceded in death by his parents Nancy Mann McConnico and Dean Carlton DuBois. He is survived by his partner of 24 years (and husband of six) Bart Hudson of Bethesda/Pensacola; his sister Denise DuBois Taylor (Sledge) of Como, MS; brother John Beck McConnico (Kristina) of Oakland, CA; nephew William Claiborne Taylor (Rachel) of Milton, MA and nephew Andrew Kearney Taylor of Memphis, Uncle John McConnico (Carole Jean ) of Lively, VA. A memorial service will be held in Memphis in July, 2020. There will be a private burial in the family cemetery in Brownsville, TN during the 194th annual Taylors of Tabernacle family reunion, a legacy of which he was very proud. Memorials may be made to the Tabernacle Cemetery Fund, c/o Betsy Thornton, 57 Old Highway 19, Brownsville, TN 38012; or to a charity of the donor's choice.
Published in The Commercial Appeal on Aug. 22, 2019.

Memphis, TN
​
Daniel Lee Adams, 65, of Memphis, TN, passed away August 7, 2017 after a short illness at Methodist LeBonheur Germantown Hospital. Dan was a member of Hope Presbyterian Church. He was preceded in death by his parents, Paul and Clarice Adams, and his brothers, Robert Adams of Memphis and Phil Adams of Oklahoma. He is survived by his daughter, Julie Adams Pruitt, and his grandson, Tyler Pruitt, of Olive Branch, his brothers, Wayne Adams and Jim Adams of Connecticut, and sister, Debbie Adams Frazier of Memphis, as well as his dear companion, Linda Oltmann, of Heber Springs, Arkansas.

Danny was an avid outdoorsman who was passionate about fishing and hunting and the comradery of his many friends who shared those times with him. He was a charter member and 1979 President of Memphis Bass Club, an original organizer of the St. Jude Bass Classic, a founding member of several clubs, including Green Head Farms Hunting Club, the OFW Club at Fat Possum Hollow in Heber Springs, AR, and the Boss Pit BBQ team. They have competed in the Memphis in May BBQ contest for over 30 years, as well as many other contests around the mid-south, winning the World Championship title in the shoulder division in 1989.

Danny loved people and was loved by many who always enjoyed his presence, and his humor and wit, and his many entertaining stories. It was not unusual to be with Danny in some obscure out-of-town place and run into someone that knew him. Many people will remember Danny by the "smile in his eyes" that exhibited his love and enjoyment of life, one of the many things that drew people to him. Danny had multiple successful careers in sales, including years in marine sales, information technology, and his most recent as Marketing Representative for Tupelo Neurology.

Visitation will be Friday, August 11, from 6:30-9:00 at Memorial Park Funeral Home and the funeral will be Saturday at 2 p.m. at Hope Church Chapel on Walnut Grove. Memorials may be sent to St. Jude Children's Research Hospital.
Published in The Commercial Appeal on Aug. 10, 2017

Keary worked for a season as an RN, however, her true calling was teaching. She was a clinical nursing instructor at Belmont University for 20 years. She was a member of the Honorary Nursing Society, Sigma Theta Tau International. She will live on in the hearts of the students she has touched with her dedicated, humble service to each and every one of them.

Keary was a devoted mother, loving wife, passionate teacher and caring nurse. She was guided by her love and unwavering faith in God, and was a member at Christ Presbyterian Church. Keary shared her special gifts through numerous mission trips to Cambodia, service to many nonprofits in Nashville and was instrumental in the formation of the church's ministry to college students.

Keary also served as a nurse at Camp Country Lad in Monterey, TN for 20 years. She cherished the time she spent there with her sons, nephews, and campers.

Laraine Kaye Baird Mitchell, 64, passed away September 18, 2016. She is survived by 2 daughters, Bethany Mayahi and Jennifer (Adrian) Hernandez; 2 grandchildren, Ali and Alexander; 3 sisters, Sondra (Lowell) Roddy, Linda (John) Bennett, and Ramona (Timothy) Martin and their families. She was preceded in death by her parents, Dr. E. Colvin Baird and Thalia Buck Baird and her sister, Cynthia Bell. A memorial service will be held on Saturday, September 24, 2:30 pm at Memorial Park Funeral Home. The family will receive friends at 1:30 pm, prior to the service. In lieu of flowers, the family requests memorial donations be made to Fight Colorectal Cancer or to the charity of choice.
Deaths up to March, 2020

Linda Stroud Miller, 69, of Cordova, passed away on Sunday, February 23, 2020. She was preceded in death by her parents, Maxine and Larry Stroud and a brother, Patrick Stroud.

She loved the beach and taking care of her family at home. Animals were always a part of her life. She will truly be missed by everyone.

The family will receive relatives and friends on Wednesday, February 26 from 5:00 pm until 7:00 pm at Memorial Park Funeral Home and Cemetery, 5668 Poplar Avenue in Memphis. The funeral will be held on Thursday, February 27 at 2:00pm also at the funeral home. The committal will immediately follow.
https://www.memorialparkfuneralandcemetery.com/obituaries/Linda-Miller-43/#!/Obituary

Linda Stroud, 1970
Curt Carter Nazor (Sr, Class of 1970, CHS)
Memphis, TN
02-Nov-52 -- 23-May-20
​
Born in 1952 at Naval Station Norfolk to Frank Fuget Nazor and Mary Louise Graham Nazor, Curt Nazor grew up in midtown Memphis. He was an outstanding athlete. He was a football quarterback, a basketball forward and a baseball pitcher at Central High School, class of 1970. Curt attended UT Knoxville and Southwest TN Community College before starting his career in computer programming. He worked many years for Gate Gourmet (formerly Dobbs House Inc.) in Clark Tower and subsequently retired from FedEx last year.

Curt fought cancer courageously but passed away on May 23, 2020, in Seattle, WA, in the loving care of his daughter and son-in-law. Those who knew Curt knew he was a kind and generous person. He was dedicated to his family and will be missed very much.

Other names to be added here when available - if any mistakes please email rlivingstonjr@hotmail.com 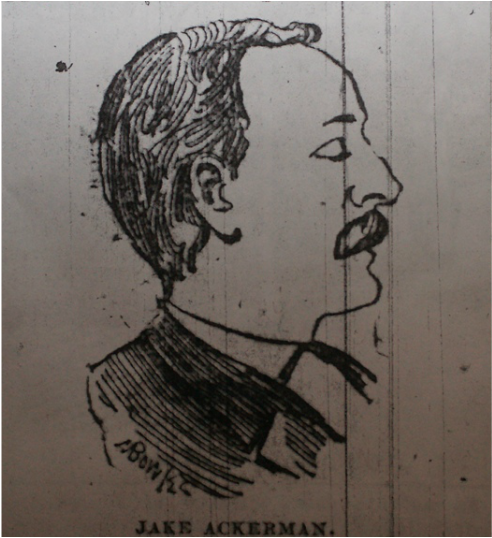 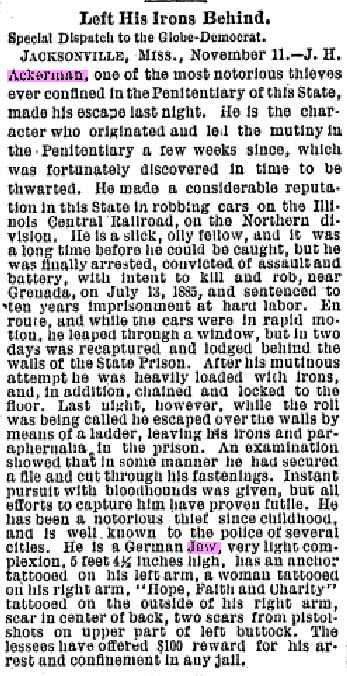 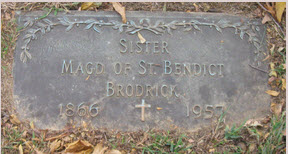 Gravestone of Elizabeth B Broderick - aka "Lizzie Ackerman" - Murderer of Jake Ackerman, aka "Jew Jake" 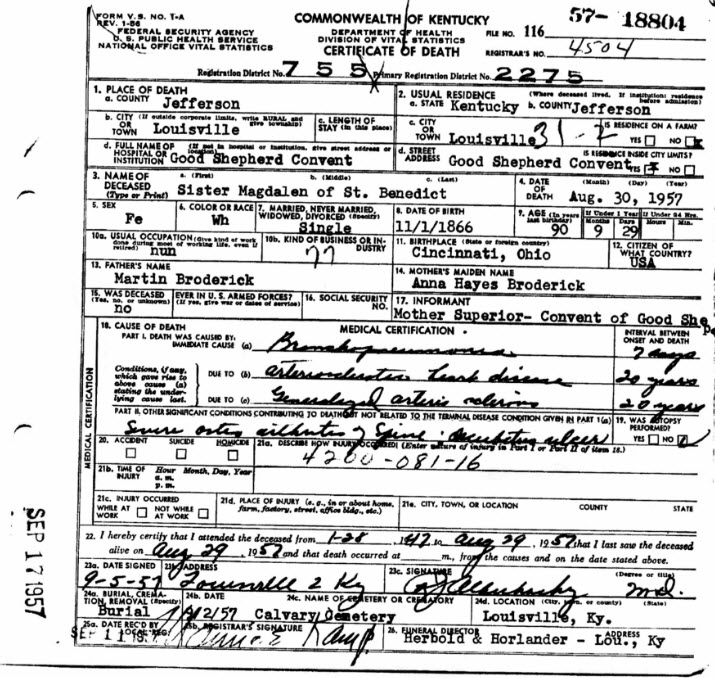 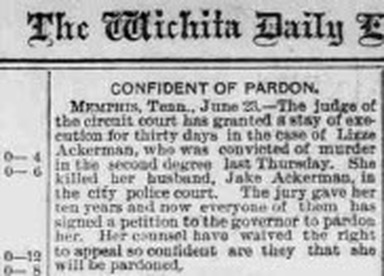 Death Certificate in 1957 of Elizabeth Broderick - aka "Lizzie Ackerman" - Murderer of Jake Ackerman, aka "Jew Jake" (changed her name to "Sister Magdalen of St. Benedict" when she entered the Convent of the Good Shepherd in Louisville, KY some time in 1891/92)
The Wichita Daily Eagle - Tues June 24, 1890 - Confident of Pardon 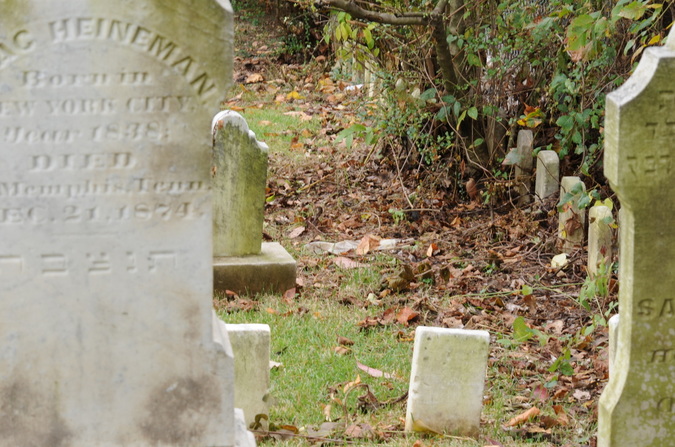 "Evildoer's Section," (small stones to the right) in Temple Israel Jewish Cemetery, Memphis, TN (many buried here in graves only marked by their initials were in The Mackerel Brigade - a street gang in Memphis, TN in the 1860s/70s - run by "JewJake" Ackerman for a while around 1868/69 after the 1st leader, Tom Porter, was gunned down in Mar, 1868 by the Memphis Police)
Facilis descensus Averni:
Noctes atque dies patet atri ianua Ditis;
Sed revocare gradium superasque evadere ad auras.
Hoc opus, hic labor est.

The gates of hell are open night and day;
Smooth the descent, and easy is the way:
But to return, and view the cheerful skies,
In this the task and mighty labor lies.
(translated by the 17th C English poet, John Dryden)