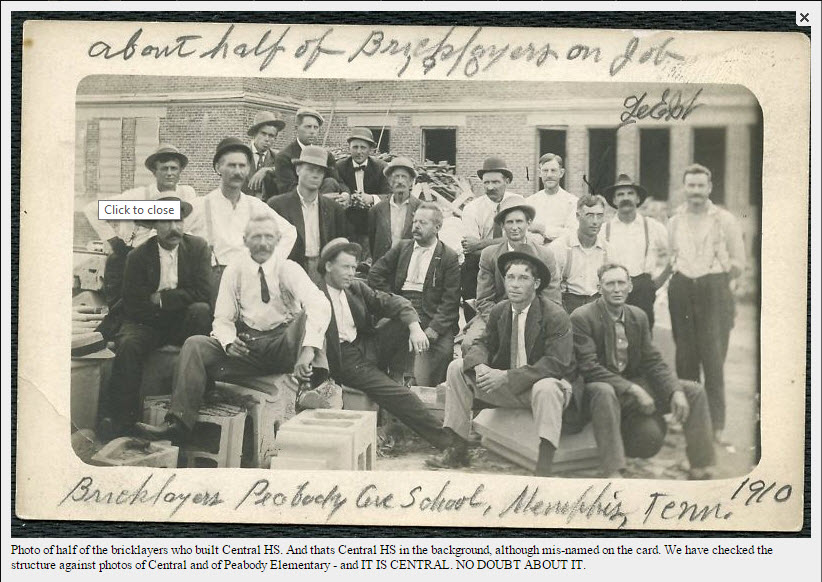 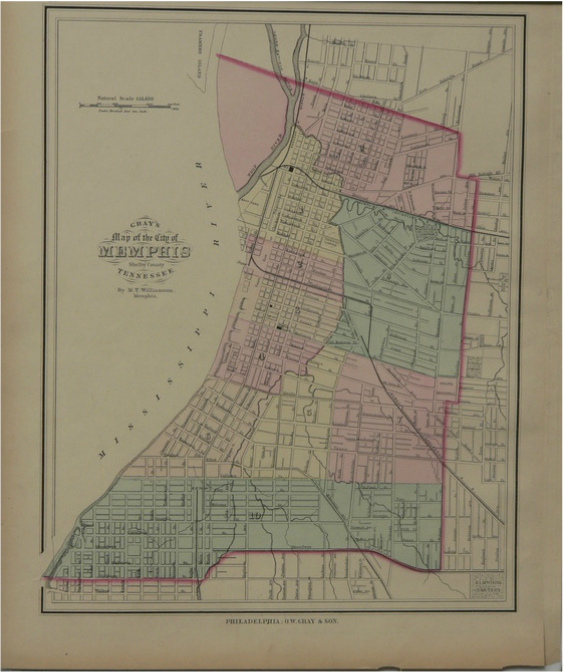 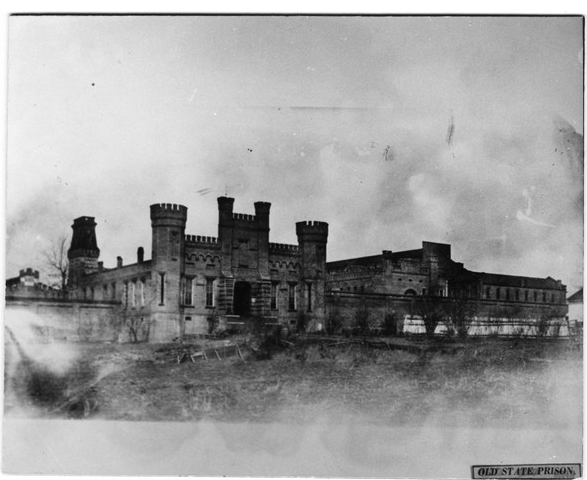 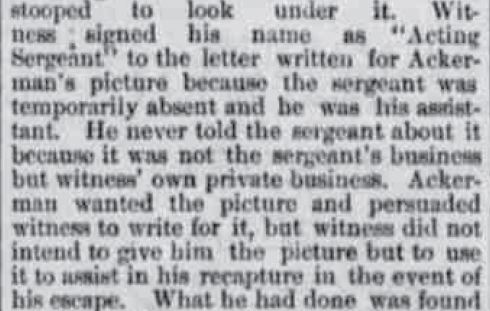 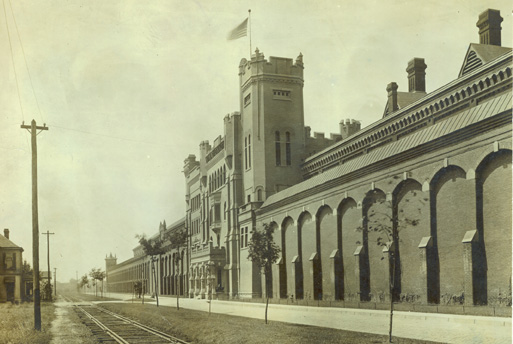 Old Indiana St Pen South in Jeffersonville (Clarksville town nearby actually), IN where Jake Ackerman was in 1877-82
Memphis Daily Appeal, January 05, 1878, Image 4 - JAKE ACKERMAN'S EXPLOITS. A Promising; Young; Criminal who was Born and Reared. In Memphls.

Evansville Courier:  Jacob Ackerman, who was sentenced to five years in the penitentiary, on Saturday evening, was one of the most notorious criminals known to the officers of Evansville, Cincinnati, Louisville, Indianapolis and Memphis. Marshal Brennecke, who has been looking out for him for several months, and who at last convicted him, has given us the following history of him: he was born and reared in Memphis, where his father was engaged in the grocery business. While young, Ackerman formed bad habits, and was early known as a thief, and was for a time one of a gang of sharpers who traveled on the lower Mississippi steam boats, fleecing the cotton-pickers who were on their way up the river at the close of the cotton season and then had plenty of money. It became rather hot for him there, and the first that Evansville knew of him was the robbery of a passenger on the Charles Morgan [steamboat] of ninety dollars and a fine gold watch, about two years ago. He left the boat here, and was not heard from for about six months, when he was arrested in a house of ill-fame on Division street. The gold watch, in the meantime, had been recovered in Cairo [IL], where Ackerman had sold it. Ackerman was held for several days on the charge of stealing the gold watch and money, but the person from whom they were stolen would not come down and prosecute him.

Leaving Evansville on the H. S. Turner, he landed at Louisville, with two partners. Two hours later he went into a pawnbroker's to price some jewelry. After looking at it he left, and said he did not wish to buy, but as soon as he was gone the pawnbroker missed a diamond ring valued at seventy-five dollars. Officers were notified, and in about twenty minutes Ackerman was in jail with his partners. They were thoroughly searched, but the ring was gone, and with the assistance of effective lawyers he was acquitted. He came back to Evansville in the fall of 1876, and had been here but a few days when he robbed the cash-drawer of the Allen house saloon, and, hiring a horse and buggy, he went over to New Harmony to attend the fair. Officer George H. Throbe went over and brought him back. Ackerman was tried again and acquitted, with that wonderful fortune for which he is noted. While in the county jail he formed the acquaintance of

and on his release married her, while she was in Henderson, employed as a servant at the Henderson house, and then professed to reform, and commenced work for Mr. Burbank, of Henderson. He concluded to return to Evansville, and with his wife started on the Maggie Smith. On the steamer he met a lady from Nashville, going east. He was accommodating to her, gave her directions, etc., but when he left, and she went to feel for her money, she found that the sharper had picked her pocket. The lady could not remain to prosecute Ackerman, and he again escaped. It was shortly after this that he deserted his wife and ran away with a young girl of this city, and then shook her in Kentucky. He was next heard from in St. Louis, but managed to keep out of custody there. He returned to Evansville, and about October 3d [1877] stole a bolt of cloth from Bunge & Klaus, for which he received the sentence under which he is now in custody. After the robbery he left Evansville and went to Washington City, but about the time of the late Senator Morton's funeral went to Indianapolis, where, with a gang, he seems to have acquired considerable money in plundering visitors from abroad, and was found with a bolt of silk in his trunk. His trial resulted in an acquittal. Immediately after, he was brought to Evansville, and with the rest of history you are familiar." Besides this, it is charged that Ackerman had two wives, or at least two he has claimed as such. One was Ida Blake, a prostitute, whom he married in the south, and who afterward came to this city. This is how he came to linger around Evansville. He always claimed her for his wife, and did up to the time of his arrest, although he is known to have married a girl in Henderson. Ackerman is quite a young fellow. He is very intelligent, accomplished, and plays the piano very finely. 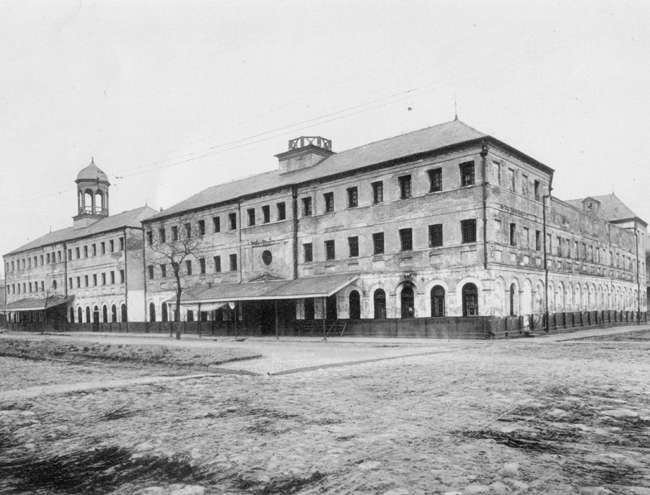 Old Parish Prison in New Orleans, LA where Jake Ackerman was in 1871-72 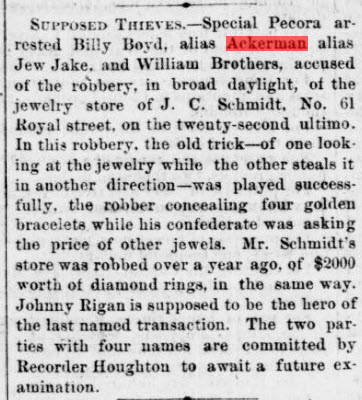 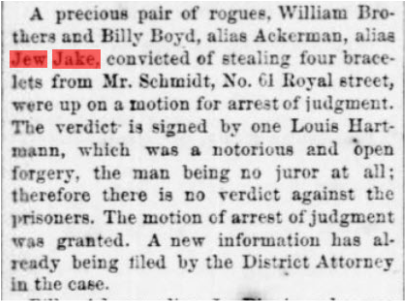 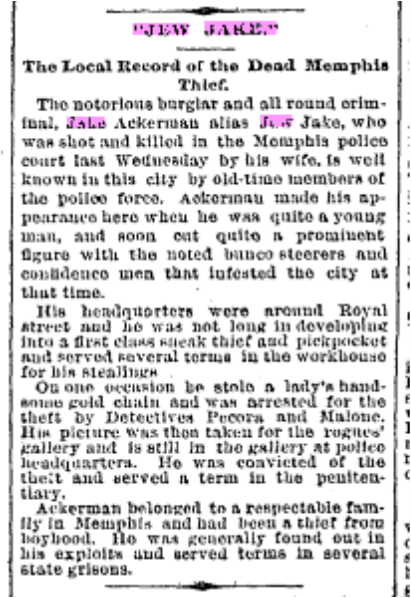 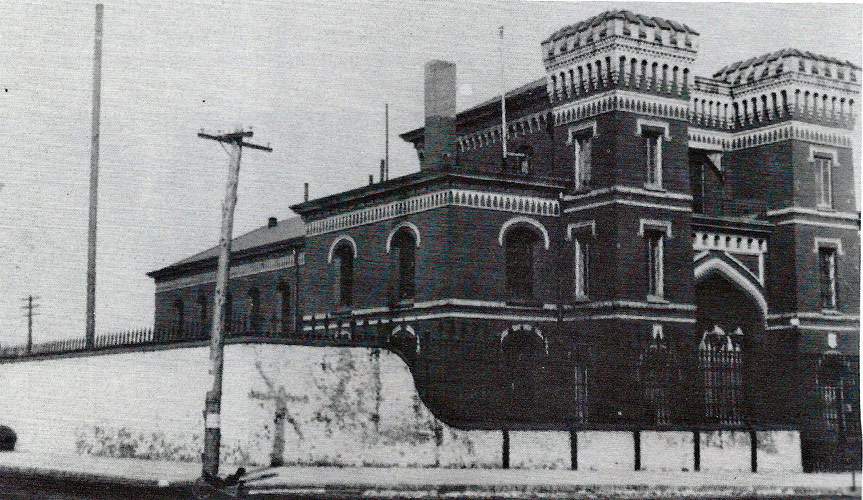 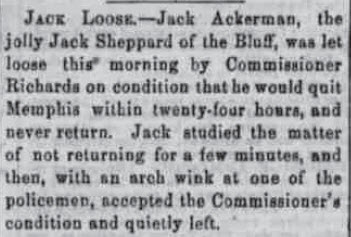 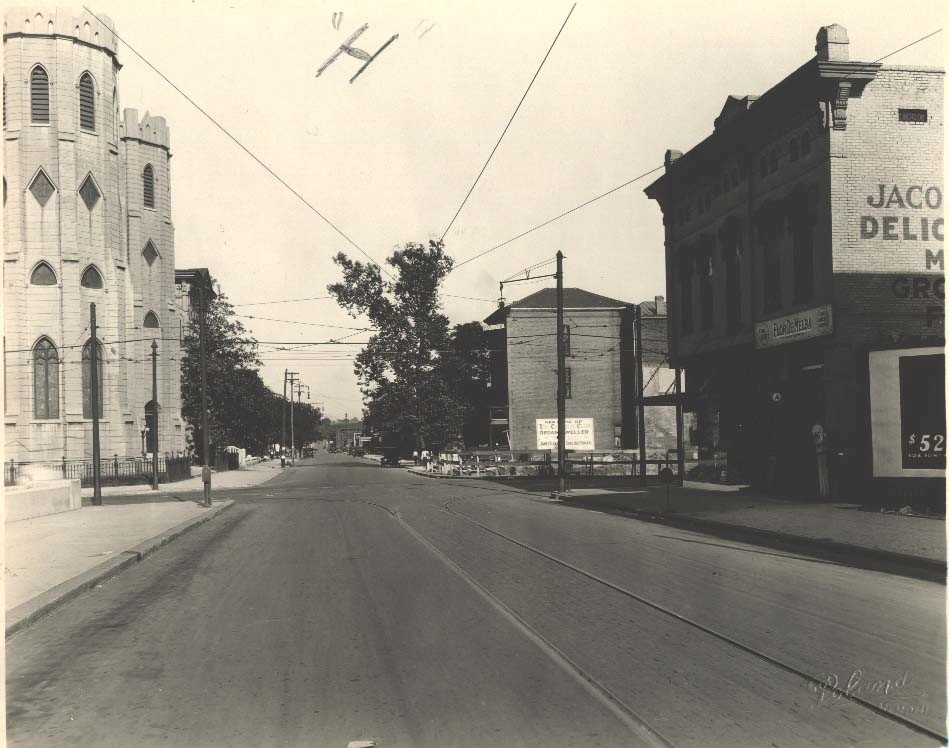 Location to the right (@ "JACO. . .") of the Old Adams Street Police Stationhouse Jail in Memphis, TN where Jake Ackerman was off and on between 1862-73 (the old stationhouse fell down and was razed in 1885 - no photos of it exist - this photo was taken about 1920)

August 24, 1862 - Nathan Bedford Forrest's "negro mart" to become city jail in Memphis
The New Jail.-
Mr. Park [Memphis mayor then], Mr. S. Tighe and Mr. Amis, acting as Jail Committee have secured Col. Forrest's negro mart on Adams street, between Second and Third street for the purposes of a jail at the rate of twenty dollars per month. Mr. Hardwick, of the Hardwick House, has agreed to feed the prisoners for thirty cents a day.
Memphis Union Appeal, August 24, 1862. 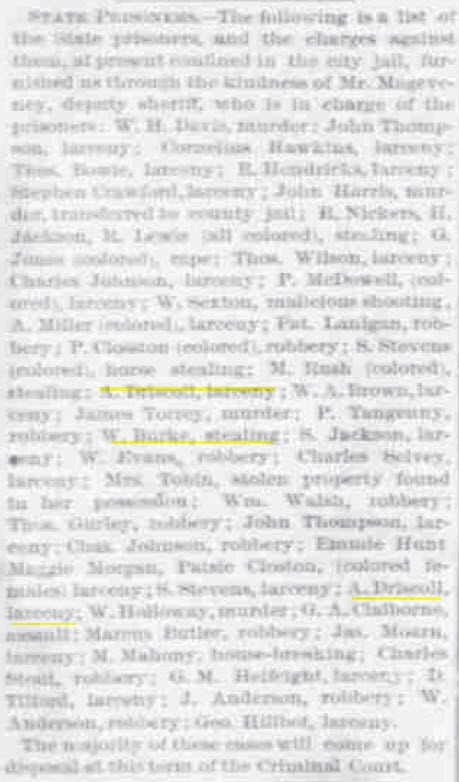 Memphis Daily Appeal, November 10, 1865, Image 3 - Prisoners in the City Jail by Name including one W. Burke who may be Jake Ackerman; A. Driscoll is also in there who is really Daniel Driscoll, a ring leader in The Mackerel Brigade with W. Burke (William Burke) who together figured prominently in the May 28, 1863 Gayoso Savings Institution Bank Robbery on Madison at Main, Memphis, TN

Memphis Daily Appeal, December 23, 1865, Image 3 - Condition of the City Jail on Adams at Third (old Slave Market of Gen. N.B. Forrest) - the 13 yr old boy in there could be Jake Ackerman (M. Burke his alias) - ". . .a horrible place of punishment and a disgrace to the districts. . .the rooms in the basement about fifteen feet square, full to overflowing, and we call on the friends of humanity to assist the proper officers to abate the dreadful evil. . . ." 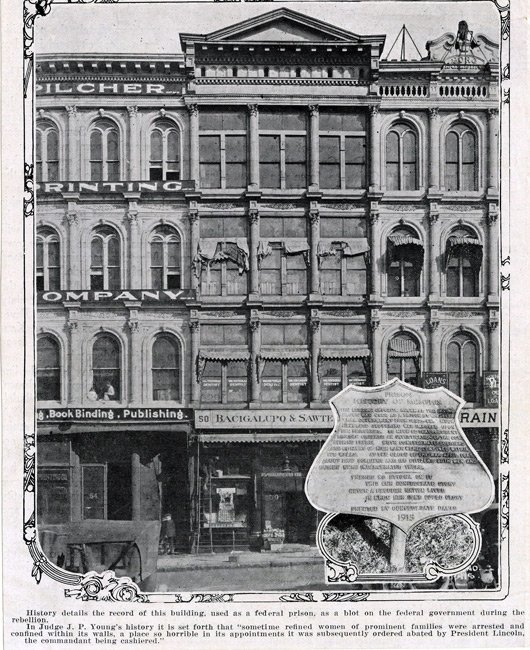 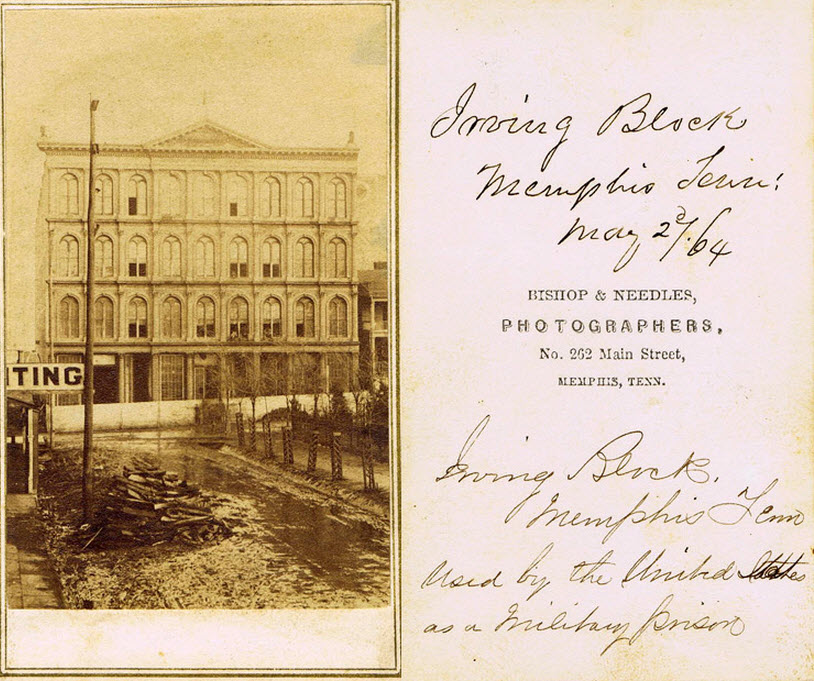 Old Irving Block Military Prison (Civil War) at Second St and Jefferson, East side of Court Sq in Memphis, TN where Jake Ackerman was in 1863 (under the false name/surname of Michael and/or William Burk or Burke)
Powered by