In 1966, the Memphis City Schools faculty was integrated and all 12 grades were technically integrated, although in reality that might mean 20 black students and 2,000 whites in a high school. Integration began in earnest with the Supreme Court's 1971 decision approving busing as a means of desegregation.

MEMPHIS (AP) - A black coalition, seeking concessions from the city school board and mediation of a predominantly Negro union's strike against a private hospital, staged another downtown protest march yesterday. However, only about 140 took part in the demonstration in contrast to the 2,500 who marched Tuesday. Student absenteeism also dropped sharply down to 14,403 on the second day of the coalition's call for a continuing boycott of schools. Tuesday 23,418 pupils skipped classes, some of them to take part in the march. Normal absenteeism runs from 5,510 to 6,000 daily. "WITH THIS drop in absenteeism the picture looks considerably brighter," said Edgar Jacobs, head of the school system's attendance division. "The children need to be in school getting an education." Absenteeism has ranged up to more than 66.000 on a series of "Black Mondays" called by the coalition. Six persons were arrested during the march which drew a protest from union official Jesse Epps, a leader of the demonstration. Epps said he wanted the white community to "know that we are not going to stand idly by and see one of two or two of us (demonstrators) snatched off at a time." ASST. POLICE Chief Bill Price said 14 marchers were arrested on disorderly conduct charges on complaint they used abusive and threatening language to persons on the sidewalks. Few people were in evidence as the march started but after the arrests 10 police cars, including special services station wagons carrying tear gas fogging machines, paced the marchers while the police helicopter circled overhead. Epps said the black alliance could have enlisted "hundreds or thousands" to take part in the march but instead decided on a cooling off period to await possible concessions from the school board and the struck St. Joseph Hospital. "IT APPEARS TO US that instead of a period of cooling off we have no choice," he said. Epps, representative of the American Federation of State, County and Municipal Employees, said another large march was planned for tomorrow followed by a still larger one Monday, the sixth in a series of "Black Mondays." As school board officials and coalition leaders pondered the implications in the drop in pupil absenteeism, a nine-member citizens' committee met again in secrecy in another effort to mediate the school crisis. 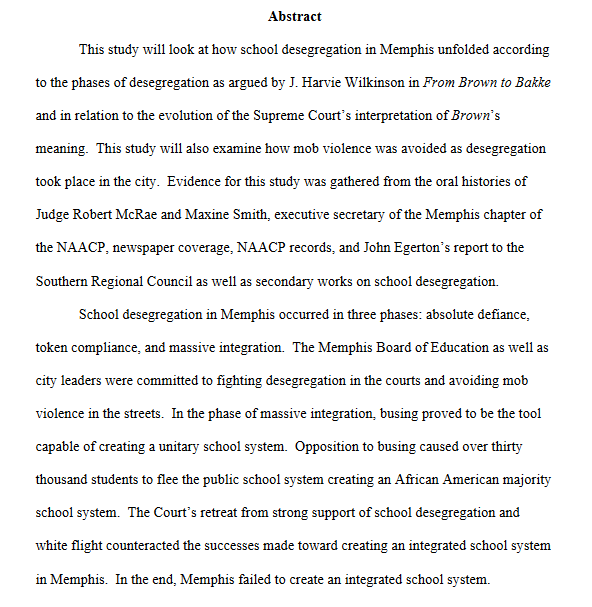 The Black Monday protest of 1969 in Memphis reveals how the civil rights struggle shifted from gradual to immediate action. All facets of the Black community (education, workers, organizations, etc.) united to create changes because they were tired of receiving less respect, pay, and recognition as their white counterparts. The Black Monday protest reveals how the fight against discrimination and racism in education unified the Black Memphians to fight against these problems throughout the city.

The NAACP was at the center of the civil rights movement in Memphis. The latter part of the 1960s presented the organization with new challenges. The formation of the Ghetto Development project came as a result of negotiations in which the organization’s local branches began taking direct action against merchants in Black neighborhoods who did not hire “Negroes in proportion to the business done by them.” The Memphis branch began boycotting and picketing local stores a month after the NAACP National convention. This direct action tactics led to the Bellevue-McLemore Shopping Center hiring a large number of Blacks.

The organization’s direct action tactics gained popularity in the Black community and by the end of the year, the NAACP had exceeded its membership goal of 10,000 by 1,500 members. The organization also had a new leader in Ezekiel Bell, the head of the Ghetto Development Project who organized the boycotts and pickets of local merchants. Therefore, when the organization began its Black Monday campaign, it had already prepared the community and had its support.
​
Through these radical measures, the Black Monday campaign occurred in four phases. The first phase of the boycott included students being absent or leaving schools on Mondays and participating in marches. Students who did not participate still became involved in the boycott because parents pulled them out of schools and most of the schools in Black neighborhoods were forced to close. Second, teachers participated in the boycott and marches because they were refused entry into the city’s Board of Education building. Third, the formation of the United Black Coalition expanded the boycott to include the striking St. Joseph hospital workers and other organizations in the city. This caused the boycott’s effort to combine the fight for education and labor. Although the boycott was already taking place, marches intensified during this phase to include an economic boycott of white downtown businesses. Lastly, a nine member biracial committee negotiated a deal with the NAACP in which the organization compromised on their demands, bringing an official end to their involvement and causing many executives to resign. 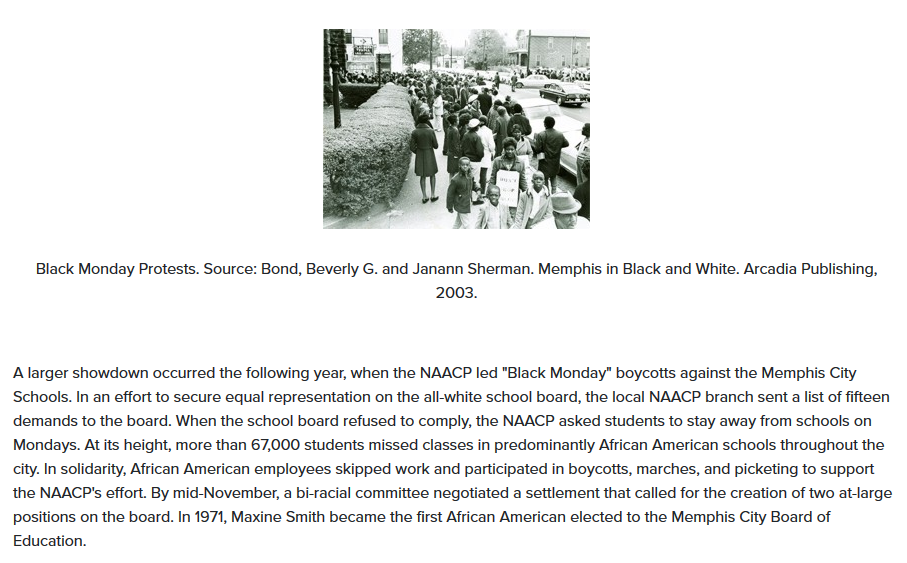 MEMPHIS (AP) - Nineteen persons, including the head of the Southern Christian leadership Conference, were indicted by the Shelby County Grand Jury yesterday on charges stemming from recent school boycotts and disturbances and a hospital strike. The Rev. Ralph David Abernathy, SCLC head who led one march and was arrested during an earlier attempted march, was the only person outside Memphis who was indicted. The other 18 were local civil rights leaders and officials of the American Federation of State, County & Municipal Employees. DR. H. RALPH Jackson, head of the minimum salary department of the African Methodist Episcopal Church and one of those indicted, said a statement answering the indictments would be prepared today. There was no announcement of the charges listed in the indictments [Charges in the indictments ranged from inciting or assisting children under 18 to leave or fail to attend school to a similar charge of contributing to the delinquency of a minor by interfering with school attendance]. This will become known when those indicted make bond or are taken into custody. Attorneys for those indicted are expected to surrender them today at the Shelby County sheriff's office. Fire and police director Frank C. Holloman several weeks ago asked Dist. Atty. Gen. Phil M. Canale to launch an investigation into the school boycotts and the disturbances. Canale assigned a task force to the investigation and the Grand Jury began its probe Nov. 26. UP TO HALF the total enrollment in the city's public schools were absent on a series of black Monday boycotts called by the Memphis branch of the National Association for the Advancement of Colored People and a black coalition. The boycotts and downtown protest marches were designed to pressure the school board into granting black demands for an increased Negro voice in school affairs and for recognition of the union at St. Joseph [hospital].